Alonso and Honda to blow up in Indy

Bernie put into a home

Ron Dennis not going down without a fight

Stewards to be investigated

Verstappen gets Kimi to talk

Vettel angry at Ricciardo for racing

Rosberg takes his hat off to Hamilton

Renault closing in on deal to buy Renault

Alonso and Honda to blow up in Indy

Bernie put into a home

Ron Dennis not going down without a fight

Stewards to be investigated

Verstappen gets Kimi to talk

Vettel angry at Ricciardo for racing

Rosberg takes his hat off to Hamilton

Renault closing in on deal to buy Renault 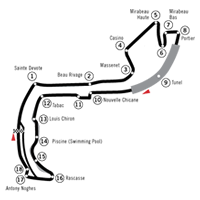 Well, basically, we are approaching turn one at St Devote at around nine hundred miles per hour, pulling upwards of one hundred G. Braking hard into the right hander and up the hill at Rivage. This is where I famously hit a painted white line in the rain back in 1984. That is probably one of the most famous moments in the history of motor racing. Although I only brushed the barrier lightly, few people realise it was actually a very serious accident and I broke my back in six different places, compressing my spine by about three inches. I was paralysed from the neck down for a week, although I didn’t realise this until after I’d walked back to the pits and contemplated retiring.

So after the left hand kink at Massenet, it’s a tricky corner at Casino Square. Back in the days of turbo engines and ground effect, we were probably cornering here at around four hundred miles per hour and pulling G-forces which would kill an ordinary person who’d never driven a Grand Prix car before.

Down the hill and avoiding the big bump on the left hand side of the track, turning into the tricky Mirabeau. Getting this line right is crucial because if you lose traction here your car might implode and potentially kill you.

A hard left into the hairpin which is the slowest corner on any Grand Prix track anywhere in the world, although back in my day we were still taking it at a speed that was approaching the speed of sound.

Then it’s round Portier, where Ayrton Senna famously crashed in 1988, although his crash wasn’t as famous as mine in 1984 and he didn’t break every bone in his back. Then it’s into the tunnel where cars are going so fast they could actually drive upside-down. The television cameras don’t do justice to the change in light when you go into the tunnel. We are basically driving through pitch black and having to use our super human senses to keep the car on the track. Experience is key here because one small mistake could see you drive over the barrier and into the sea. When you emerge out of the tunnel, the full power of the sun could potentially blind you which is obviously dangerous but still fun.

Braking hard into the chicane where Ayrton Senna famously brake-tested me in 1992 which was quite dangerous and he could have killed me but he was an exceptional talent and I was honoured to finish runner up to him that day.

Then it’s a run through Tabac and past the Swimming Pool where the lateral forces on a driver are so strong they can potentially rip your head off your shoulders if you haven’t physically trained for it.

If you haven’t been killed by the immense forces pulling at your body, it’s a tricky right through Rascasse and Antony Noghes and back onto the main straight, accelerating so quickly that, if a member of the general public were to attempt it, they would probably be sucked into the back of the headrest and vapourized.

Crossing the line and hope that you’ve qualified on the front row. It’s important to qualify well here because overtaking is hard and there’s no point just making up the numbers in my opinion.